A posh suburb in Kochi, one should definitely pay a visit to Aluva when in God’s Own Country. Situated on the banks of the River Periyar, this place is much beautiful and provides many picturesque sites. From being the home to the royal family of Travancore to the celebration of many pious festivals, Aluva is known for quite a lot of similar things. Located at a distance of just twelve kilometers from the main city of Kochi, it is also well connected with all the nearby places, thus, making transportation easy and cheap.

Due to the intervention of government the tourism industry of this place has picked up majorly in recent times. The hot spots of tourists in Aluva are as follows. 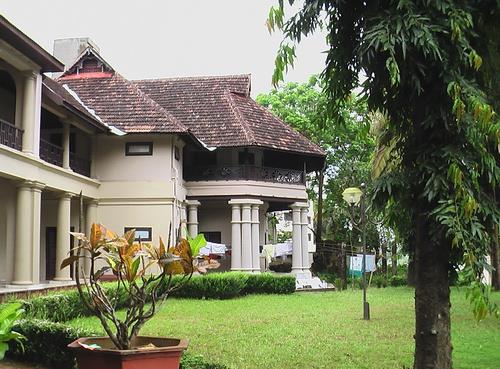 Located in the lap of the beautiful Periyar River, this palace was a summer residence to the royal family of Travancore in the yesteryears. One of the biggest palaces of Kerala, it is very famous and attracts a swarm of tourists every year. The English–Travancore fashioned architecture is the major attraction.

If you are a religious person then Aluva is strongly recommended for you. You can see churches at every corner in Aluva, giving it a very sacred atmosphere. Amongst the many churches of Aluva, the Parish Church is pretty famous.

Situated in Kapraserry, the major feast of the Church is called Little Flower Parish fiesta. This feast is celebrated with huge pomp and glory and is, thus, the major attraction of the church. The Parish architecture attracts some other expressions of praise for the church.

Situated in the heart of the city, this place falls towards the left side of the Periyar River. Usually very quiet, it is a calm home to the local flora and fauna and is a delight to the eyes. It lights up during the festival of Mahashivratri when lakhs of devotees visit the place.

This temple is located at a place known as Sreemoolanagaram in Aluva. It is believed to be the most religious temple of the entire state of Kerala. The position of the statue of Gods is what makes it different from other temples. Lord Shiva is facing East in the temple. Just behind him is Goddess Parvathi, his better half. This sort of arrangement is considered very holy and is a rare site in any of the temples.

Uliyanoor is a small village in Aluva known for its rich culture and traditions. It is known to the world for its Mahadeva Temple wherein Lord Shiva faces the east, the Periyar River.

The popularity of the temple resides in the fact that it was built according to the traditions. Be it the length, breadth and height of each deity or the circumference of the compound, this temple has everything just perfect. There is not even a centimeter here and there. Thus, the popularity!

If you want to delve deeper into the history and architecture of the Indian civilizations, then no place is better than this. Housing a temple of Lord Krishna, this place provides great insides into the medieval architecture.

You will miss something in life if you will not pay a visit to this splendid beauty. The sparkling water of this river gives you an unknown positive energy. The banks are fenced by huge coconut trees making it a perfect picturesque spot.

About Mahasivaratri Celebrations in Aluva

The second day is the day of Vavubali wherein one pays tributes to their ancestors. The third and fourth day are the days of a procession called Dikvijayam. A tradition of Pallivetta takes place on the fifth day and the celebrations conclude on the sixth day.

Important Information for Tourists in Aluva

In case of any problem, you can contact the Department of Tourism in Aluva.
Address: Palace Road, Thottakkattukara, Aluva
Phone: 18004254747 (Kerala Tourism Customer Care Number)

Are you a Business Owner?

Add the products or services you offer